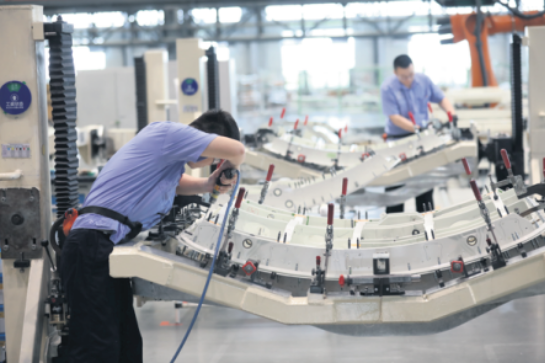 European aircraft manufacturer Airbus said it has been rebuilding and diversifying the layout of its global supply chain since the outbreak of the COVID-19 pandemic, and is willing to see more Chinese enterprises become its suppliers as it is forming a "vertical integration supply chain in China".

Over the past decade, Airbus has constantly expanded its supply chain network in China, its largest market. So far, it has more than 200 suppliers in China, including 23 tier-one suppliers from whom Airbus purchases parts and components directly.

"We are forming a vertical integration supply chain in China, meaning we purchase raw materials and parts, do the parts assembly and deliver the aircraft in China to lower costs of transportation and raise efficiency," said Yang Xiaoyu, Airbus' head of flyable procurement in China and East Asia.

"We also hope to develop more local Chinese suppliers that are in line with global standards of Airbus."

Airbus said it would continuously increase the production rate of the single-aisle A220 aircraft, a model to which 15 Chinese firms supply one-third of the airframe. The 100- to 150-seat A220 is equipped with five seats in a row for its economy class. The model fills the gap between regional aircraft and regular single-aisle aircraft such as the A320.

"The global aviation industry is still casting a cloud on the future due to the pandemic, and international travel is stagnant. The A220 serves as the only Airbus model that has seen a stable production rate since the pandemic. The A220 is expected to become a bright spot in the downturn of the global aviation market," said Li Min, senior marketing director of Airbus China.

The plane maker said Chinese suppliers have shown a strong motivation and intention to meet the manufacturing criteria of Airbus. Airbus applies the same standards and methodologies of manufacturing in China, Europe and everywhere else in the world.

For instance, SAC Commercial Aircraft International Ltd, a subsidiary of Aviation Industry Corp of China, based in Shenyang, Liaoning province, Northeast China, is a major supplier to the A220 project. SACI has delivered 400 forward fuselages and rear barrel sections, 100 hatch doors, 100 tail cones and 100 mid-fuselage of the A220 to Airbus so far.

To date, the A220 has received about 650 orders from more than 25 carriers globally. The aircraft model, however, is not operated in China yet. Airbus said it is in discussions with a number of Chinese airlines and they have shown interest in purchasing the model. The A220 is also in the process of getting airworthiness certificate in China.

Airbus said its main target market for the A220 in China is western China, a region that boasts top tourism resources but where high-speed trains do not have any distinct competitive advantage, given the vast land.

Last year, Airbus' annual industrial spending on the commercial aircraft business in China reached about $1 billion, up almost 60 percent from the 2016 level, it said.

"Airbus' increasing investment in China shows its recognition of China's manufacturing skills and the capacity of the civil aviation industry chain in China," said Zou Jianjun, a professor at the Civil Aviation Management Institute of China.