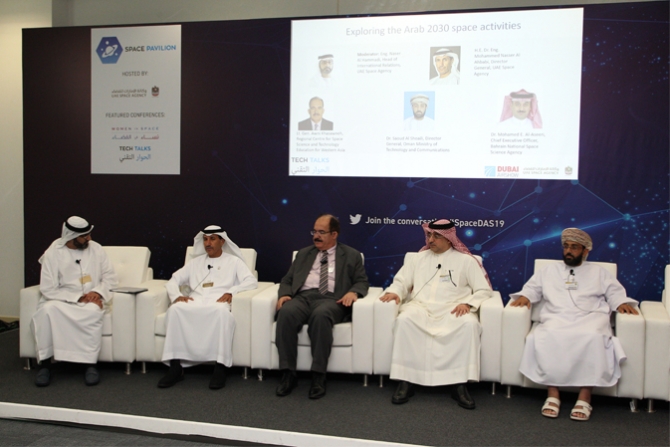 The future of space exploration and the impact of tech under the spotlight on day three.
Efforts to create a collaborative Arab Space Agency were discussed today, as Dubai Airshow 2019 hosted its first Space Tech Talks conference.
Focusing on the future of space exploration and its impact on the technology sector, the programme featured a host of keynote sessions from speakers including His Excellency Dr. Eng. Mohammed Nasser Al Ahbabi, Director General of the UAE Space Agency, Masood M. Sharif Mahmood, Chief Executive Officer at Yahsat, and Pierre Delsaux, Deputy Director General of the European Commission.
Recognising that collaboration will be key to the success of any future moves into the field of space exploration, from the UAE’s National Space Strategy 2030 to the Mission to Mars project, Dr. Al Ahbabi said any initiative of the UAE’s was an initiative for the whole of the Arab world. With 14 countries already collaborating on plans for a regional space strategy and satellite project, he highlighted examples of the European Space Agency and African Space Agency, saying: “All the space scientific projects cannot be done without collaboration with other countries. We hope to one day have an Arab Space Agency too. We are next, I believe.”
Among the day’s other key events, Colonel Al Worden, who served as the Command Module Pilot of Apollo 15, hosted a keynote session examining the lessons learned from the Apollo 12 moon landing. He also spoke about his new Endeavour Scholarship, launched in collaboration with Kallman Worldwide, which will see four Emirati students and two teachers sent to space camp in the USA. Colonel Worden said: “The UAE is the first and we’re going to do that with eight different countries initially, because these young people are our future. We’re trying to motivate them into space and we want them to understand what science, technology, engineering and maths are all about.”
The Space Tech Talks conference was taking place for the first time amid a Dubai Airshow programme that has this year given increased spotlight to the region’s momentum in the space sector, with Monday featuring a Women in Space programme that looked at the future of diversity in the region.
Commenting on the success of the programme, Rachel Sturgess, Portfolio Director at Airshow organisers Tarsus F&E LLC Middle East, said: “There’s no question that space exploration is a key focus for both the UAE and global aerospace industry, and we have been honoured to welcome some of the field’s leading pioneers to the Dubai Airshow 2019 for this new programme of events.”