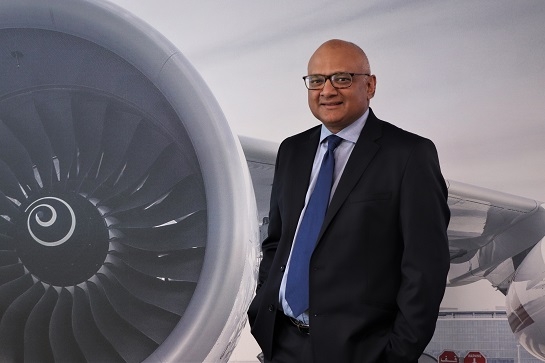 How has the pandemic impacted the aviation industry’s drive to become more sustainable?

It has certainly been a very challenging time for the aviation industry, and we’ve been doing all we can to work closely with our partners and customers during the Covid-19 pandemic. Nevertheless, and encouragingly, during these difficult times we have seen increasing interest from airlines, airports and corporations in lower carbon solutions for their business.

Have industry players been quick to adapt technology to cater to the changing needs in achieving sustainable goals?

Aviation is one of the most challenging industries to decarbonise, however, airlines, companies across the supply chain, governments and industry bodies are taking action on a number of fronts to cut industry carbon emissions and reduce the environmental impact of aviation. For example, aircraft and aircraft engine manufacturers are constantly innovating with more efficient aircraft and engines. As a result, we are already seeing more aerodynamic aircraft and engines that are lighter and more efficient, which mean they burn less fuel.

At bp, we’ve been taking significant steps to help shape a lower carbon aviation industry for over a decade. We were involved in fuelling the first SAF flight by an airline in February 2008 and since then we’ve been enabling ground-breaking test flights and investing in sustainable alternatives. To date, we’ve supplied SAF to over 20 locations across three continents.
bp plays a number of important roles to help scale up the supply of SAF both in the long and short-term. This includes providing ongoing technological expertise to research and develop the technologies required to bring the different SAF production pathway options to commercial production.

In which areas and geographies do you see strongest potential for growth?

Currently, Europe and the US are attracting the most attention due to announced government programs for SAF. Customers and governments from other regions are starting to be more active by developing their SAF advocacy.

What green technologies do you predict will impact the aviation industry most in the next five years?

We believe that the use of sustainable aviation fuels within conventional aircraft will likely make the biggest impact on lifecycle carbon emissions and we are actively working to increase its supply.

There are five different technologies to produce SAF which together Air bp believe can supply the volume of SAF required globally.  These are: hydroprocessed esters and fatty acids (HEFA); municipal solid waste (MSW); alcohol to jet; second generation biomass; and eSAF (where SAF is produced from combining green hydrogen and carbon dioxide).

The choice of technology used will depend on the effectiveness in reducing carbon emissions, cost, feedstock availability in different parts of the world and society preference via policy which can also prioritize certain technologies and feedstocks.
We expect new feedstocks and conversion technology pathways to come to market to complement existing supplies which is the majority of what is supplied today. For example, in relation to the municipal solid waste (MSW) technology, bp has invested in Fulcrum BioEnergy who are commercializing such a process.

Are the aviation industry low carbon goals achievable and what will be the main drivers of change (government; airport requirements; passengers)?

Yes, we believe the goals are achievable but only with collaboration across the industry and with governments to implement all the solutions available. For example, investments in more efficient aircraft, improving operations efficiency and infrastructure, optimal flight airspace planning, use of sustainable aviation fuel, future energy such as hydrogen and electric, and carbon offsetting will all be required to achieve these goals.

We believe that change will be driven from a multitude of angles. Changes in government policy or regulation (e.g. sustainable aviation fuel mandates and incentives); airports and aircraft operators recognising their need to play a role and the benefits (initially perhaps reputational but ultimately licence to operate given the preferences of passengers, corporate travellers and air freight customers); and suppliers – investing and developing technology and scaling up e.g. fuel production technology; aircraft technology.

How can governments support sustainable travel?

Governments have a role to play in the short-term - interim support from governments and other stakeholders through policy incentives is needed.

Over the long term, investment in advanced technologies is required to process SAF feedstocks more efficiently at greater scale and investment in the development of sustainable and scalable feedstock options. Again, governments have a role as increasing SAF production requires long-term policy certainty to reduce investment risks, as well as a focus on the research, development and commercialization of improved production technologies and innovative sustainable feedstocks.

Since January 2020 the Norwegian government has mandated at least 0.5 percent SAF in all aviation fuel which impacts business aviation as well as airlines. This mandate has had the effect of creating solid demand for SAF in the country which helps create further supply in the region. In July 2021, the Swedish Government introduced a greenhouse gas reduction mandate of 0.8 percent for aviation fuel sold in Sweden, and they aim to raise this to 27 percent by 2030. France have announced a mandate from January 2022 of 1% and other European countries such as UK and Germany as well as the EU are planning their own mandates.

We support fully proven ambitious and achievable SAF blending targets, as well as policies which promote the development of SAF. Many of the SAF production technologies are still to be scaled up, but we believe the best way to make them viable is a stable long-term policy framework that gives confidence for investors to back these projects.

What are your expectations from Dubai Airshow 2021 - which will be the first of its kind event since the coronavirus outbreak?

Air bp is excited to return to the Dubai Air Show 2021 as a sponsor, exhibitor (Stand 1328) and speaker at the Aviation Sustainability Conference taking place live at the Dubai Air Show on Monday, 15 November.  Air bp’s global aviation sustainability director, Andreea Moyes will be presenting a session on: ‘The disruptive technologies accelerating SAF development’.

The Middle East is an important market for Air bp so the show is a great opportunity to connect with our customers and prospects. Air bp has been active in the Middle East for nearly 90 years, providing fuel and services to general aviation, commercial aviation and military customers.  Through its direct business and joint ventures, Air bp is currently operational in UAE, Iraq, Egypt, Bahrain, Kingdom of Saudi Arabia and Lebanon. We currently market fuel at 20 locations throughout the region providing fuel and services to around 190 general aviation, commercial aviation and military customers. We look forward to meeting with our customers face to face again and sharing our latest exciting news and developments.

Finally, what are Air bp’s plans ahead in the region?

Air bp sees a strong future for aviation in the Middle East and will continue to invest and contribute to its future development and success.

We are excited to highlight that Air bp’s award-winning digital Airfield Automation technology is now available at three locations in the region at Emirates Flight Training Academy (EFTA); Dubai International Airport (DXB) and Sharjah Aviation Services Company at Sharjah International Airport (SHJ). Designed to enhance safety and reliability in airport fuelling operations, Airfield Automation has been well received by operators who have reported increased speed and efficiency in refuelling.

Furthermore, having been awarded a 10-year concession to supply and provide into-plane jet fuel services at Erbil International Airport (EBL/ ORER) in Northern Iraq in 2014, Air bp is expanding its services and extending its concession to 2034. As the capital of the semi-autonomous Kurdistan region of Iraq, Erbil is a commercially vital location. Air bp is the majority shareholder in MMAFCO, the joint venture (JV) at the airport and has worked closely with the Ministry of Natural Resources and the largest local refinery (KAR) to enable stable jet fuel production and supply in line with international standards. As part of the new agreement, Air bp has also committed to rehabilitating Erbil Airport’s fuel farm.

With sustainability at the core of Air bp’s strategy, in September parent company, bp joined forces with the Abu Dhabi National Oil Company (ADNOC) and renewable energy firm, Masdar, to form a strategic collaboration to explore opportunities to provide clean energy solutions for the UAE and the UK. As part of this collaboration, the three companies intend to work together to seek to pioneer decarbonised air corridors between the UK and the UAE – one of the busiest global air travel routes – further strengthening the commercial and cultural ties between the two companies in a sustainable way.

Air bp also unveiled its ‘book and claim’ solution. Certification is to be provided by the Roundtable on Sustainable Biomaterials (RSB). This solution can provide customers with wider market access for the optimal supply of sustainable aviation fuel (SAF).

Register today for the Dubai Airshow and attend of THE most important aerospace & defence event of the year!