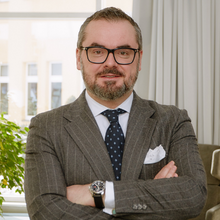 Advisor to the Chairman

Jean Claude Knebeler is a Moscow-based ESG and GR advisor, entrepreneur, investor and independent board member.

He is Head of the Sustainable Development Department at the International & Comparative Law Research Centre CLRC an independent member of Gazprombank’s Group Sustainability Council, Chairman of ExactFarming LLC (improving agricultural productivity using Big Data analysis). He is the founder of Lux Global Advisory LLC, providing board-level expertise on issues at the intersection of sustainability, geopolitics and global markets.

Jean Claude had a first career serving as a diplomat, with his latest posting leading him to serve from 2016 to 2020 as Ambassador of the Grand Duchy of Luxembourg to the Russian Federation, with co-accreditations to Kazakhstan and Belarus.

From 2012-2016, he was Consul General in New York and Executive Director of the Luxembourg Trade & Investment Office, covering business diplomacy in the Eastern halves of the United States and Canada.

Jean Claude spent almost 20 years of his diplomatic career focusing on issues related to trade & investment as well as economic development, having been diplomatic advisor to the Minister of the Economy & Foreign Trade of Luxembourg and serving as Director General of Trade & Investment, a member of the Ministry of the Economy’s management board. He was instrumental in developing the bilateral economic relations of Luxembourg with emerging economies such as Russia, China as well as pioneering economic engagement with the Middle East with a focus on the GCC countries. He promoted the establishment of the first Luxembourg Trade & Investment Office in the region, located in Dubai, which led to the establishment of today’s Embassy in Abu Dhabi.

How can the cargo industry reduce its C02 impact while keeping up with the next day delivery culture? In this session we explore some viable options operators can adopt, such as going paperless to reduce weight on board, investing in lightweight ULDs,  modernizing fleets and sustainable aviation fuel.