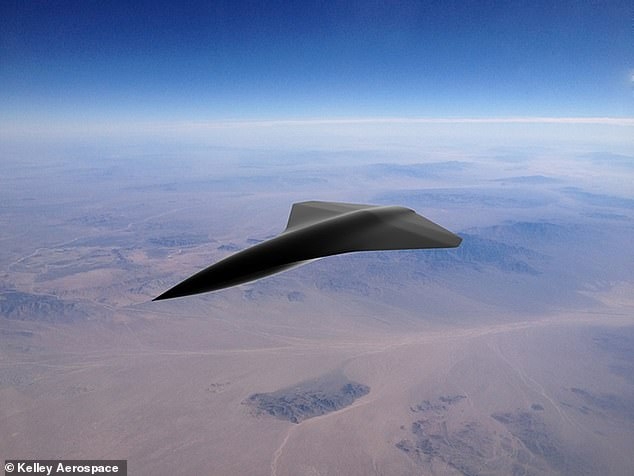 Singapore-based Kelley Aerospace has officially launched the world's first supersonic unmanned combat aerial vehicle (UCAV).
Called 'Arrow,' the drone is designed with a single-shell made of lightweight carbon fiber that allows it to reach speeds up to Mach 2.1 – exceeding the speed of sound. The UCAV is fitted with a reduced radar cross-section and infra-red signature, and is designed for multiple combat or reconnaissance roles.
The firm says it has already received more than 100 pre-orders for the war machine, which costs between $9 million to $16 million.
'The Arrow is designed to complement manned aircraft and be a force multiplier in the aerial battlefield,' Kelley Aerospace shared on its website.
A manned combat aircraft would control 'multiple' Arrow UAVs, tasking 'each with a different missions.' This would allow military officials to add a variety of weapons depending on the mission.
Kelley also says that Arrow can launch autonomously or be remotely controlled by two ground station controllers. Arrows maximum weight is 37,038 pounds, but its monocoque design 'endows the Arrow with outstanding strength and stiffness,' the firms shared in a statement.
However, what makes this machine so special is that it is the first to travel faster than the speed of sound, which is Mach 1 – but Arrow can reach Mach 2.1.
It is estimated that it will not cost more than $16 million with prices going as low as $9 million. Kelley notes that this 'allows more airframes to be purchased and yet, have a multi-role supersonic UCAV to perform high-risk missions as it does not necessarily need to return home.'
Continue reading the article here...
Source: Daily Mail