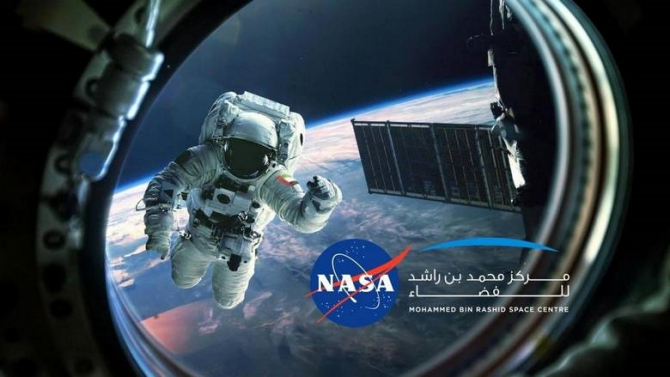 The UAE has signed an agreement with Nasa to train Emirati astronauts for potential missions to the International Space Station (ISS), His Highness Sheikh Mohammed bin Rashid Al Maktoum, Vice-President and Prime Minister of the UAE and Ruler of Dubai, announced on Monday.
Such missions would include space walks and long-haul station missions, Sheikh Mohammed said on Twitter.
UAE astronauts Hazzaa AlMansoori and Sultan AlNeyadi have already begun their training at Nasa's Johnson Space Center in Houston starting Monday, Salem AlMarri, head of the UAE Astronaut Programme, at the Mohammed Bin Rashid Space Centre (MBRSC), said during a media briefing. AlMansoori and AlNeyadi had earlier trained at the Yuri Gagarin Cosmonaut Training Center in Star City, Moscow, in September 2018 as part of their preparation for their launch to the ISS.
Two more Emirati astronauts will also undergo training at Nasa as per the agreement, AlMarri said. Two astronauts to be selected from the second batch of the UAE Astronaut Programme will join the 2021 Nasa Astronaut Candidate Class, in which they will receive the training that US space agency's astronauts undergo. The training programme will prepare Emirati astronauts physically and psychologically for future space missions.
"Training will be for around two-and-a-half years and it will prepare them for long-duration missions to ISS," said AlMarri. The official said that after the training, the candidate will graduate as "astronauts with user and operative level experience with ISS" so that they can not only be part of a mission but also operate the space station.
The programme created as part of the new partnership includes the same modules and components featured in the training of Nasa astronauts. Under the programme, the astronauts will be trained to manage various missions on the International Space Station, including simulated spacewalks and long-duration stay, along with training in major systems, robotics, extravehicular activity, T-38 jet courses, water and land survival, Russian language skills and theoretical training. The UAE's participation in the Nasa training programme reflects the global reputation of the country's space sector and its leadership among spacefaring nations.
The Johnson Space Center is one of the world's largest centres for spaceflight training, research, and mission control. A pioneer in human space exploration for more than half-a-century, the Johnson Space Center, founded in 1961 in Houston, has been at the forefront of American human space flight programmes.
MBRSC Chairman Hamad Obaid Al Mansoori said the strategic partnership with Nasa, a space pioneer for more than 60 years, supports the strategy of the UAE's National Space Programme. "Emirati astronauts will benefit from Nasa's extensive infrastructure, experience and knowledge in spaceflight development and operations."
"This agreement is a clear testament of the strong economic, cultural and diplomatic ties between the UAE and the USA," added Al Mansoori.
Nasa's Deputy Administrator James Morhard added: "The US and UAE enjoy a strong relationship here on Earth, and we are excited to extend that relationship into the final frontier."
"This agreement to train Emirati astronauts will pave the way for even closer relations between our two nations creating new opportunities for the UAE to become involved in the International Space Station, Artemis, and other Nasa activities," he added.
The UAE Astronaut Programme is one of the projects managed by the MBRSC and funded by the ICT Fund of the Telecommunications Regulatory Authority, which aims to support research and development in the ICT sector in the UAE.
In July 19 this year, the UAE successfully launched the Mars Hope Probe, marking the Arab world's first interplanetary mission.
Launched from the Japanese space centre, the $200 million project called Al Amal, meaning the Hope, is scheduled to reach Mars orbit in February 2021, coinciding with the UAE's 50th National Day.
Source: Khaleej Times