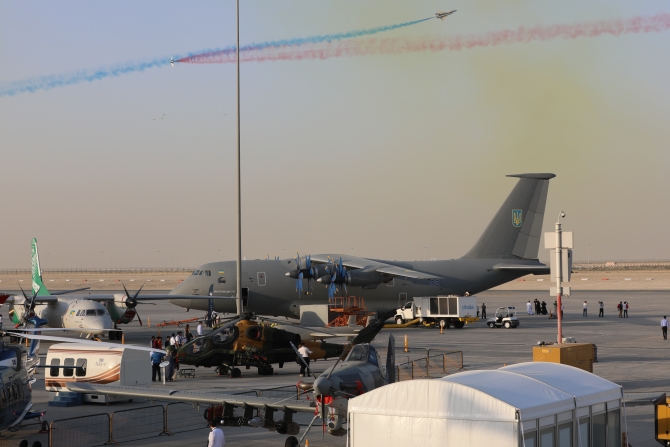 Regional defence spending to reach USD$100 billion in 2019
Middle Eastern defence spending will reach USD$100 billion in 2019, led predominantly by Saudi Arabia and the UAE, according to Jane’s by IHS Markit forecast. Out of the top ten defence spending nations per capita, five are in the Middle East as are nine of the top 15 defence budgets per GDP.  On average, Middle Eastern countries spend 13% of their fiscal budgets on defence annually with Oman and Saudi Arabia spending close to 20% and 30% respectively. In fact, Saudi Arabia’s 2019 defence budget is USD$51 billion, making it the third largest military spending nation in the world.
It is a clear sign that defence is high on the priorities of regional governments and is set to increase. The UAE’s defence budget is growing at a 6.5% CAGR and accumulatively over the years to 2021, the country will spend USD$140.8 billion of which USD$53.1 billion will be on asset acquisition.
With the Dubai Airshow taking place 17-21 November at DWC, Dubai Airshow Site, the world’s leading defence companies will be displaying their latest innovations to an audience including show attendees and delegations from around the world.
“The Dubai Airshow is strategically the most important aerospace exhibition for the UAE Armed Forces and one of the most important events of our calendar,” Major General Abdulla Al Hashmi, Assistant Undersecretary for Support Services at the UAE Ministry of Defence, confirms. He continues, “Every two years when the event takes place, the UAE Armed Forces has the opportunity to interact with potential and existing suppliers, discover new technology and equipment, and network with the key industry players from around the world.”
Bob Harward, Middle East Chief Executive of Lockheed Martin, says, “The next generation of advanced materials, autonomous systems, human-machine collaboration and cyber-hardened platforms plus mission systems all have the potential to create critical solutions that shape our industry for decades to come.”
He adds, “We’ve had a strong relationship with the UAE for four decades, initially supporting defence programs like the C-130 Hercules cargo aircraft, F-16 fighter, PAC-3 missile interceptor and THAAD anti-ballistic missile system—all technology solutions to help the UAE protect their citizens. At this year’s Dubai Airshow we look forward to showcasing some of those long-term partnerships and programs as well as our space and energy solutions to help support our partners now and into the future.”
Lockheed Martin will be exhibiting at the Dubai Airshow 2019 in addition to key global defence names including Rafale from France, Raytheon from the USA and new this year will be the Korea Defense Industry Association. Saudi Arabian representation is growing in line with its market commitment with first time appearances from INTRA Defence Technology and Saudi Arabian Military Industries (SAMI). SAMI was launched in May 2017 as key part of the Kingdom’s 2030 vision, to act as a sustainable platform to provide world-class military products and services to the Kingdom of Saudi Arabia and its allies.
Al Hashmi confirms the networking potential and global reach of the event. “The UAE Armed Forces uses the Dubai Airshow as a platform to bring together military delegations from around the world to demonstrate what the UAE is capable of and to exchange information and learn from each other.”
The Dubai Airshow Delegations Programme, co-ordinated by show organisers, in conjunction with the UAE Ministry of Defence, Dubai Civil Aviation Authority and the Government of Dubai, invites military and civil delegations to participate.  In 2017, the show hosted 279 delegations from 76 countries around the world, with that number expected to increase in 2019.