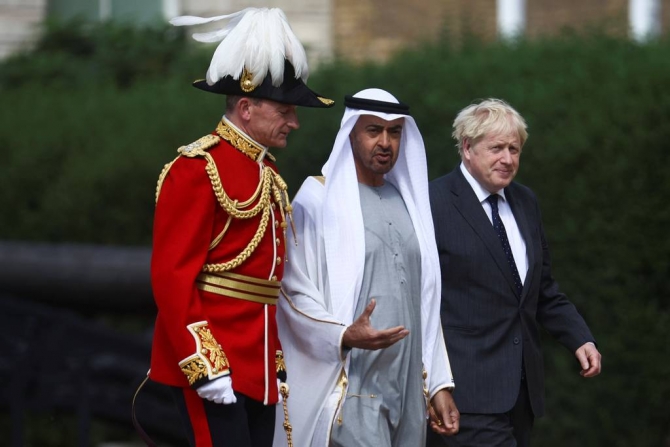 BEIRUT — The United Arab Emirates and the U.K. recently signed a memorandum of understanding on artificial intelligence that would see the transfer of related knowledge, investment and standards. And the next day saw the UAE’s Tawazun Economic Council sign a memo with the U.K. Ministry of Defence to strengthen cooperation in defense-related research and development.

On Sept. 16, Mohamed bin Zayed, the crown prince of Abu Dhabi and deputy supreme commander of the armed forces, met British Prime Minister Boris Johnson in the U.K., when the two parties launched a “Partnership for the Future” between the two nations, which involved the AI effort.

“The UK looks forward to further collaboration with the UAE Presidential Guard; between our two air forces through UK participation in the Advanced Tactical Leadership Course, with UK jets from the Carrier Strike Group, and increased land exercises in the UAE,” read a joint communique released after the meeting. “Both countries have developed stronger industrial ties through collaboration in defence and security. This includes blossoming relationships, including Tawazun Economic Council and EDGE Group. The Leaders agreed on working together to support these emerging and future partnerships in order to promote prosperity whilst strengthening business opportunities for both.”

After the signing, Al Hosani said in a statement that the memorandum “builds on the growing strategic ties between the two countries, and it aims to establish a framework to strengthen ties in defense and security industry fields and to identify new opportunities for commercial cooperation.”

An industry source with knowledge of the deal told Defense News that the two parties are still in the exploration phase but will eventually concentrate on four areas:

The source said the U.K. and the UAE are also looking to support startups and small and medium-sized enterprises in both countries with the hopes of eventually gaining access to a broader portfolio of products and technologies for use by the Emirati military. The armed forces would then import some of that tech with supply support from local companies and receive know-how regarding the development and evolution of those products, he added.