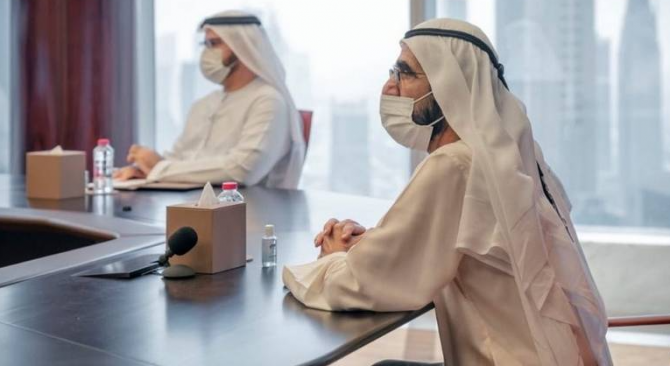 The UAE will send the Arab world's first mission to the moon in 2024, it was announced on Saturday. The announcement comes a couple of months after the country successfully launched the Hope probe to Mars - the Arab world's first interplanetary mission.
The Emirates Moon Exploration Project will see "national competencies" employed for the mission.
This came as His Highness Sheikh Mohammed bin Rashid Al Maktoum, Vice-President and Prime Minister of the UAE and Ruler of Dubai, reviewed a 10-year strategy of the Mohammed bin Rashid Space Centre (MBRSC). The strategy 2021-31 includes programmes to develop new specialised satellites and an outer space simulation centre for training, academic and educational programmes.
Sheikh Mohammed also referred to new space missions that will be announced soon. "The Emirati space programme is sustainable and would produce outputs that would have practical applications across other sectors. Professionals from these sectors will share their experiences with the rest of the country and the region. It will build international knowledge partnerships that will benefit humanity."
Sheikh Mohammed and the MBRSC reviewed the strategy that establishes a new phase of cooperation with international space agencies.
The strategy includes the objectives of the UAE National Space Programme in addition to five key components: The Emirates Mars Mission (Hope Probe), the Mars 2117 project, the UAE Astronaut Programme, the UAE Satellite Programme and the UAE Space Sector Sustainability Programme.
Sheikh Mohammed tweeted: "The UAE's ambition in the space sector explores, plans and makes the future. Our youth, engineers and pioneers open new horizons in the science, technology and innovation fields in this vital sector for the future of our world."
Innovation in space
Sheikh Mohammed was also briefed about the objectives of the new strategy to enhance innovation in the national space sector. It will prepare a new generation of qualified national cadres in the space sector to pursue advanced specialities in science, technology and space sectors. It will also attract new investments to the national space sector, which has seen more than Dh22 billion over the past few years.
Hamad Obaid Al Mansoori, Chairman of the Board of Directors of the MBRSC, said: "We are embarking on a new phase of the centre's journey with unlimited support from the leadership to achieve excellence in this vital sector for the future of humanity."
Yousuf Hamad Al Shaibani, Director-General of the MBRSC, said the 10-year strategy aims to bolster the UAE's position among the leading countries in the international space sector.