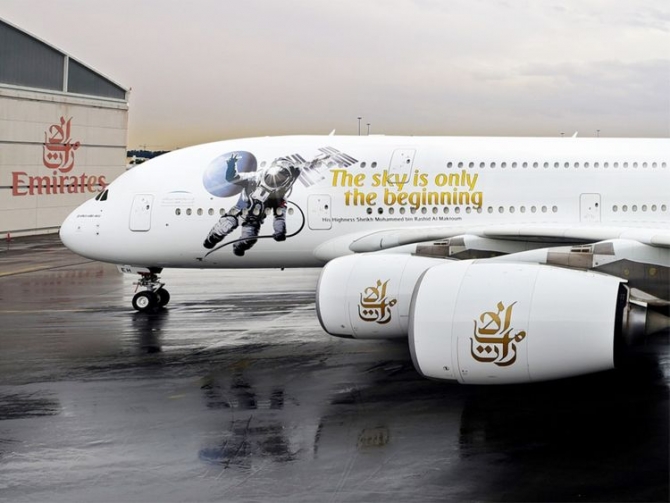 Dubai Emirates sees a sharp recovery in demand for air travel next year as coronavirus vaccines are distributed around the world, meaning the carrier's fleet of jumbo Airbus SE A380 jets could return to the skies by early 2022.
Progress on the production and transportation of inoculations should be evident by the second quarter of next year, President Tim Clark said in an interview with Bloomberg TV on Wednesday. That will lead to a release in pent-up demand "across all segments" led by those who haven't been able to travel during the pandemic, he said.
"I can see demand for travel moving at pace," Clark said. "My own view, and it's always an optimistic view, is by end of next calendar year or the first quarter of 2022 we'll have all our A380s flying."
The comments represent a rare show of positivity from an airline executive amid the worst crisis the industry has ever suffered. The outbreak of the coronavirus forced governments around the world to shutter borders or introduce stringent quarantine restrictions, leading many carriers to seek state and investor support or face bankruptcy.
Emirates, the world's biggest long-haul carrier, has been particularly badly affected as demand all but dried up on its key routes. The carrier received $2 billion in support from Dubai's government, but recent positive developments about effective vaccines indicate little extra help will be needed, Clark said. Emirates should return to positive cash flow in the first half of 2021, he added.
Clark has previously said the development of a vaccine would be key to the A380's return to wide use. Emirates will receive three of the jumbos by the end of the year, at least one of which will have a premium economy cabin, the executive said Wednesday.
Vaccine requirements
The introduction of vaccines will still require airlines and governments to set rules about whether proof of an inoculation will be needed to fly, and Qantas Airways Ltd. Chief Executive Officer Alan Joyce said his airline would make it a "necessity" .
It's still "early days" to take a position on that, Clark said. "It is likely the countries themselves will decide on requirements."
Emirates remains in the dark about when Boeing Co. will deliver its new 777X jet after a series of delays as the model is yet to be certified, he said.
"I have no idea," Clark said. "They were due to be delivered this year in June, then it was 2021, then it was 2022. It hasn't finished its certification program yet, both airframe and engine."
Source: Gulf News