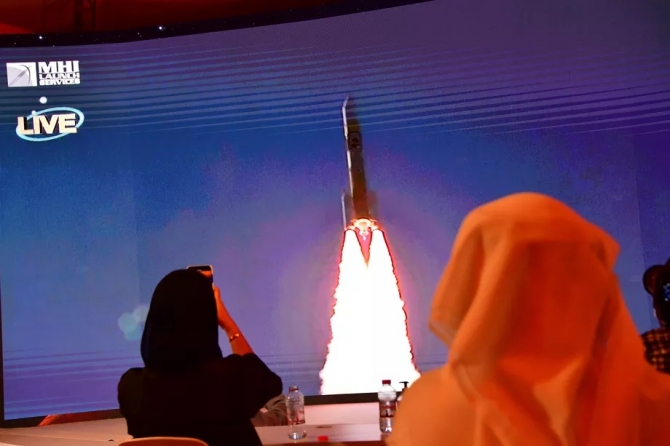 The United Arab Emirates’ first interplanetary mission successfully took off from the southern tip of Japan, sending up a car-sized probe bound for the planet Mars. The launch marks the beginning of the country’s most ambitious space project yet, aimed at studying the weather on Mars as it evolves throughout the planet’s year.
The spacecraft, called Hope, took off on top of a Japanese H-IIA rocket from Japan’s Tanegashima Space Center at 6:58AM at the launch site (or 5:58PM ET this afternoon on the East Coast of the US). The probe will now spend the next seven months traveling through deep space, periodically correcting its course with a series of engine burns. Then sometime in February of 2021, it’ll attempt to put itself into an elongated orbit around Mars, where it will analyze the atmosphere and climate throughout the course of each Martian day.
For the UAE, the timing of this launch was absolutely critical. The UAE government conceived of this project in 2014 to inspire young Emirati teens, and as a bold way to celebrate the 50th anniversary of the nation’s founding in December 2021. To ensure that Hope is in orbit by the anniversary, the team behind the spacecraft had to launch this summer, during a small window when Earth and Mars come closest together during their orbits around the Sun. This planetary alignment happens once every 26 months, so the UAE team had to launch this year to meet the 2021 deadline.
So far the launch seems to have been a smooth one. For a few minutes after the spacecraft deployed from the rocket, engineers feared that the vehicle hadn’t opened one of its two solar panels. But the UAE eventually confirmed that both panels had been deployed. The mission team noted that they were in communication with the spacecraft and that Hope appeared to be in good shape. The engineers will continue to analyze data coming from the spacecraft and provide updates on the health of Hope in the coming hours.
Continue Reading Here>>>