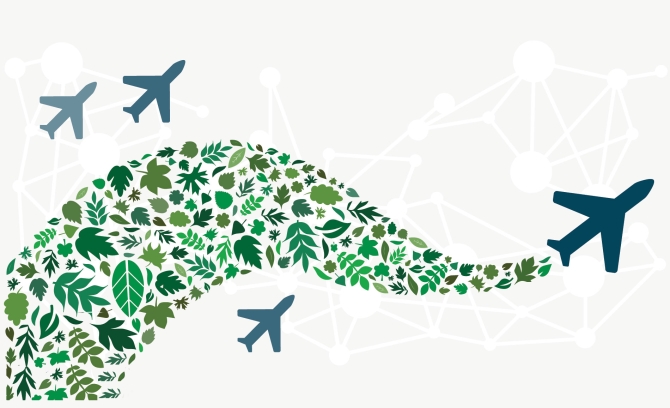 As flight and passenger numbers continue to grow following the end of travel restrictions imposed as a result of the COVID-19 pandemic, public attention has refocused on the need to decarbonize the aviation industry.

Currently, the industry is responsible for around 2.1% of carbon dioxide (CO₂) emissions, and 12% of CO₂ emissions from transport overall.i In 2009 the air transport sector committed to cutting carbon emissions on a global scale with an agreed reduction to half of 2005 levels by 2050.ii

While the emissions may seem alarming, it is a well-established reality that air transport is a crucial global service. In 2020 pre-COVID-19 there were 40.3 million flights taken and now flight numbers are rapidly growing againiii. The travel and aviation sector must cater to growing demand and achieve sustainability targets. The global need to reduce emissions is holding airline companies to a higher, greener standard. The commitments made by 40 world leaders at the recent Leaders’ Summit on Climate, hosted by US President Joe Biden, underscored this point.

Mounting pressure from governments and consumers alike, however, does not change the fact that the airline industry remains one of the most challenging sectors to decarbonize, and most flights are still powered by aviation fuel produced from fossil fuel. More efficient technology as well as innovative fuels are necessary to obtain desired environmental targets. While some of them are already being produced, such as Sustainable Aviation Fuel, or SAF, others such as Lower Carbon Aviation Fuels (LCAF) can also be a part of the solution in a transitional role.

SAF volumes and usage will grow over time, but to augment its growing usage, LCAF can play an important role - blended with SAF - in reducing the carbon intensity of the aviation industry. LCAF can contribute greenhouse gas reductions that are complementary to the reductions from SAF in lowering overall aviation fuel carbon intensity.

LCAF doesn’t require any change to current handling or fueling procedures, and neither does it require aircraft engines to be adapted. It’s the same as the fuel currently used but the lifecycle carbon intensity is less because of how it’s produced. This lowers the overall carbon footprint of the fuel usage by 10% or more.

At present, LCAF appears to be an ideal transitional fuel until more revolutionary solutions can be established to help meet and or exceed required targets.

In the technology space there is excitement particularly over electricity and hydrogen as potential replacements for aviation fuel. In the case of electricity, the existing battery technology works for short-haul flights in modified aircraft, but the weight of the batteries needed for longer flights is prohibitive. Not only do the batteries become too heavy, but their weight also remains constant throughout the flight, so that even when the battery is expended, the aircraft still has to carry that dead weight.

Research is under way into hydrogen, either as a fuel to be burned directly in aircraft engines, or as fuel in a cell powering electric engines. In both cases, there is still work left to be done before the technology is ready for industry-wide adoption.

There is no ‘silver bullet,’ as aviation grapples with the dual challenge of serving the needs of millions of travelers, while simultaneously capping, if not reducing its carbon emissions.

The key is to find the lowest carbon intensity liquid fuels that can be produced in adequate quantity to help make the transition, while new alternative technologies are developed with the time and precision required for a market-ready solution.

Both SAF and LCAF are the starting point and can support the energy transition of the aviation sector. They will create a strong base to move forwards with a balanced and achievable approach to decarbonization.

Hailed as a potential emissions savior, Sustainable Aviation Fuel (SAF), has been proposed as an alternative to the standard aviation fuel, made mostly from fossil fuel sources. SAF, however, is produced from sustainable feedstocks. Use of SAF, including drop-in fuel, means that there does not need to be any modification to aircraft engines or the fuel handling facilities at airports. Many airlines have operated flights using small quantities of SAF blended with standard aviation fuel.

While most SAF currently available comes from biomass – plants, vegetable oils, and organic waste – it is in most cases not entirely carbon neutral. There is significant energy expended in land usage, harvesting, transportation, processing and refining. One of the challenges in producing SAF is the calculation of carbon intensity of each of these many stages. For a fuel to be certified as a sustainable aviation fuel by the International Civil Aviation Organization (ICAO), independent certification authorities need to audit the entire process from start to finish to verify the carbon intensity of the fuel at the point that it is loaded onto the aircraft.

One of the promising technologies under development is what is called Power-to-Liquid fuel, or e-fuel that is obtained through the Fischer Tropsch process. In short, renewable energy is used to extract carbon dioxide from the atmosphere or from a point source such as the smokestack of a power station, and this is combined with hydrogen which is produced either by the electrolysis of water called green hydrogen, or as the by-product of an alternative process called blue hydrogen. The Hydrogen and CO2 is then combined by the Fischer Tropsch conversion process to produce a hydrocarbon liquid fuel that can be blend with conventional aviation fuel and then use as drop-in fuel.

The major challenge we face is that SAF is currently not available in sufficient volume to meet demand, and it will take some time before production capacity can be built. In 2019, aviation fuel consumption was 328 million tons per annum and is expected to be 412 million tons by 2030.  Demand for aviation fuel could increase by more than 50% until 2050. Current SAF production volumes are 0.1 % of aviation fuel demand and cost several times more than conventional fossil fuel to produce.

Without some form of major regulatory intervention, production volume is projected to be 2% of expected demand by 2030. Some markets are moving much more quickly than others: with strong regulatory and financial support, it is technically feasible to reach 10% SAF jet fuel uptake in Europe by 2030. But while SAF can play an important role, traditional aviation fuels will also be required.

There is a common misperception that all hydrocarbons are similar, if not the same, in terms of their carbon profile. But this is not true. Crude oil is found in underground deposits, known as reservoirs. Once extracted, the crude oil is sent to a refinery, where it is processed to make a range of products, such as gasoline for cars, bitumen to make roads, and aviation fuel for use in planes.

Some crude oils are located deep below the earth's surface, making them more difficult and energy intensive to extract, some are heavier in nature or contain more Sulfur and require more energy to process. Then there’s the extraction and refining process itself. Some companies flare the gas that typically comes with oil, while others capture it. And some refiners apply newer, more energy efficient processes, while others do not.

So, the aviation fuels that are produced have a broad range of carbon intensity depending on the type of crude oil used, the refining process applied, and the distance it is transported before being used.

The International Civil Aviation Organization (ICAO), a UN agency funded and directed by 193 national governments to support their diplomacy and cooperation in air transport, recognizes this. That is why a new category of lower carbon aviation fuel (LCAF) has been identified.

The ICAO has implemented a set of standards to promote the decarbonization of the aviation industry, called the Carbon Offsetting & Reduction Scheme for International Aviation (CORSIA) – one element of the basket of measures that governments and the industry are taking to reduce emissions. The organization also recognizes that there would be a transition period before non-fossil fuels such as SAF would be available in significant volumes and has thus encouraged aviation fuel producers to take every measure they can to reduce the carbon intensity of existing fuels so that they can be eventually treated as CORSIA eligible fuels if they meet the required life cycle emissions values. Why should aviation fuel producers care? That is because the airlines can reduce their carbon offsetting obligations in proportion to the life cycle emissions reductions applicable to CORSIA Eligible Fuels, incentivizing their use in place of standard aviation fuel. Aviation fuel producers who have access to low-sulfur crude oil that can be extracted with less energy and that they can process in modern refineries will clearly have a competitive advantage.

There is no doubt that public sentiment is very strongly in favor of decarbonizing the aviation industry as quickly as possible. It is also clear that some technology barriers still exist for some of the alternatives that are being explored, and that production capacity is currently limited for the SAFs that already exist. This will take coordinated changes in government policy, as well as heavy investment in infrastructure before sufficient capacity comes online. It's important that we are ambitious in our goals to reduce carbon emissions, but equally that we are realistic in our approach. As we bridge to the future, increasing the use of lower carbon aviation fuels is an immediate solution available that will help to reduce the carbon intensity of air travel.

The path to a future of low carbon emissions is not a choice between SAF or LCAF, but a combination of both in changing proportions over time to ensure that the industry’s decarbonization targets can be met.