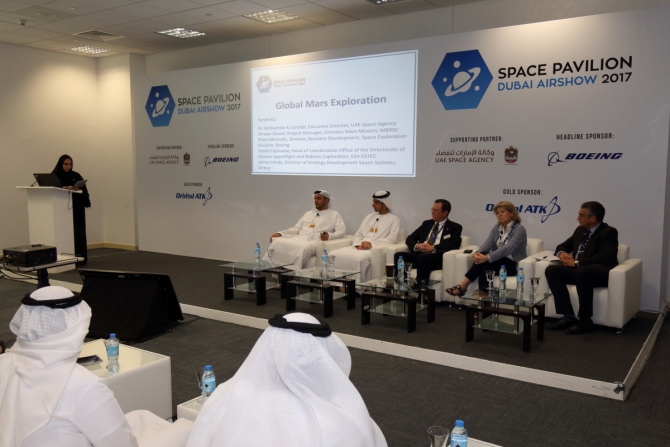 The Dubai Airshow talks about the UAE’s growing space sector
The addition of the Space Pavilion at the Dubai Airshow 2019 comes at an ideal time, given the increasing investment in the space sector. In particular, 2019 is an exciting year for the UAE space industry. The UAE partnered with Saudi Arabia, Bahrain, Oman, Egypt, Algeria, Morocco, Jordan, Lebanon, Sudan and Kuwait to form the Arab Space Cooperation Group with the shared goal of advancing the region’s space industry.
The UAE reached another historic milestone this year, as Hazzaa Al Mansoori became the first Emirati astronaut to reach space on 25 September. Al Mansoori stayed at the ISS for eight days, studying the effects of microgravity compared with gravity on Earth. Previously a pilot, he flew the UAE Air Force’s F-16 Block 60 and was one of the first Arab pilots to take part in Dubai Airshow’s celebrations on the 50th anniversary of UAE Armed Forces.
The Middle East’s investment in space is not limited to the UAE, with Saudi Arabia announcing the establishment of a national space agency lead by His Highness Prince Sultan bin Salman bin Abdulaziz Al Saud; the first Arab astronaut into space in 1985 who assisted in the deployment of the Arab Satellite Communications Organisation with NASA. The University of Kuwait has also been involved in specific projects directly with NASA and the KISR (Kuwait Institute for Scientific Research) has alluded to the potential of a home-grown agency.
The Dubai Airshow will have a huge focus on the space sector again in 2019, with an exhibition area and two dedicated conferences produced in collaboration with the UAE Space Agency: Women in Space and Tech Talks. The two conferences will focus on promoting global collaboration to deliver economical access to space, future missions and projects within the GCC while providing a global outlook into investment and innovation. Other conversations will focus on the New Space economy and the redefining of business models to boost space mission success and drive down costs, along with discussions on developing the next generation space talents through STEM education projects.
Keynote speakers include H.E. Dr. Ahmed Belhoul Al Falasi, Minister of State for Higher Education and Advanced Skills, Chairman, UAE Space Agency; Simonetta Di Pippo, Director, United Nations Office for Outer Space Affairs; Dan Hart, President and CEO, Virgin Orbit; and Apollo 15 Command Module Pilot Col. Al Worden, USAF-Ret, who returns after the success of his appearance in 2017.
“This is an exciting year for the space industry in the UAE. As a nation, we are proud to have made historic advancements in the space industry propelling the nation forward,” said H.E. Dr. Eng. Mohammed Nasser Al Ahbabi, Director General of UAE Space Agency. “As we progress toward a knowledge-based economy, we are eager to develop new partnerships with different aerospace entities and showcase our initiatives to interested parties from around the world at the Dubai Airshow’s Space Pavilion.”
Women in Space and Tech Talks will take place 18 – 19 November during the Dubai Airshow, which runs from 17-21 November at DWC, Dubai Airshow Site. For more information or to register please visit www.spaceuae.aero.