AEROSPACE INDUSTRY TO APPEAR IN DUBAI 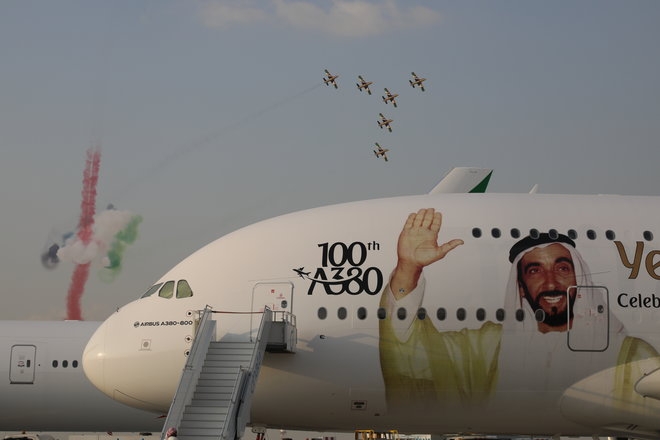 Dubai Airshow to Open Sunday
The Dubai Airshow is set to open on Sunday attracting the global aerospace industry to DWC, Dubai Airshow Site for the five day event. 87000 aerospace professionals are expected to attend to interact with 1300 exhibitors and see up to 165 aircraft in the static and flying displays during the event which features sector specific conferences including Cargo Connect, Global Air Traffic Management (GATM) and free to attend conferences in the Space Pavilion: Women in Space and Tech Talks.
Support for the event has reached incredible heights for this edition, with Dubai Airshow announcing its first ever Advanced Technology Partner, the recently launched EDGE conglomerate integrating over 25 defence entities and other independent organisations. In addition, The Helicopter Company, Saudi Arabia’s first commercial helicopter operator that launched earlier this year, backed by Saudi Arabia’s state-run Public Investment Fund (PIF), is the platinum sponsor of the Dubai Airshow 2019.
The static display will include the latest civil, business and military aircraft plus a selection of helicopters from industry leaders and new players, including an A330neo displayed by Airbus; a Viking Twin Otter Series 400 from Viking Aircraft and Cessna Caravan C208B alongside a G120TP from Grob Aircraft. Emirates Airline will be showcasing its ultra long range Boeing 777-300, A380-800 and Airbus Corporate Jet 319 while the AURA 100 UAV will be on display from Aura Group of Companies (AGC). Gulfstream will be showing its G500, G600 and G650 aircraft and other inclusions will be present from the Japanese Ministry of Defence, the French Air Force and of course the UAE Air Force.
Soaring in the sky above the Dubai Airshow in the flying display will be the UAE’s Al Fursan aerobatic display time, in addition to the French Air Force Patrouille de France, returning to the Dubai Airshow for the first time since 2011. Also flying will be an Dassault Rafale and a Boeing B787-9 as well as several helicopters and the world’s only aerobatic airline, UK-based display team the Blades.
The event boasts unparalleled industry recognition from around the world. “Dubai Airshow provides a platform for international aerospace experts and professionals to connect and share the latest trends, innovations and news within the industry,” says Ismail Ali Abdulla, CEO of Strata Manufacturing, while Ghaith Al Ghaith, CEO of flydubai  adds, “The Dubai Airshow is one of the most important events for our industry and for the region.”
This reputation as the place to be has led to an increase in exhibitors at the 2019 event with over 100 first time participants travelling from around the world to be part of the Dubai Airshow. Some examples of those exhibiting for the first time include S&K Technologies, an aerospace supplier and MRO specialist from the USA; Korea Defense Industry Association from Korea; Hexagon Manufacturing Intelligence from Italy and UAE based measurement and geospatial solutions provider MENA3D.
The Space Pavilion at the Dubai Airshow 2019 is bringing the space industry’s biggest names to speak at two free-to-attend conferences on the 18 and 19 November. Women in Space and Tech Talks, hosted by the UAE Space Agency, will discuss the evolution of the global space sector.
Over 40 influential speakers will share insights during two days of content, including H.E Dr. Ahmed Abdullah Belhoul Al Falasi, Minister of State for Higher Education and Advanced Skills, Chairman, UAE Space Agency, Simonetta Di Pippo, Director, United Nations Office for Outer Space Affairs; Jean-Yves Le Gall, President, Centre National d’Etudes Spatiales (CNES) and Leanne Caret, CEO Defence, Space & Security, Boeing.
Global Air Traffic Management (GATM), taking place 19-20 November 2019 during the Dubai Airshow, will bring together the whole industry for discussions and presentations to share insights and learnings to drive the industry forward. The two-day event will feature a line up of thought leaders and accomplished professionals, each bringing a unique blend of experience and knowledge to encourage discussion and seek solutions at a time of transition and disruption for the air traffic industry.
John McKenzie, Regional Director, MENA of Airways New Zealand underlines the importance of the event, stating, “The next five years are an exciting time in air navigation as numerous technologies continue to mature and are brought into service.” He adds, “The Middle East is widely regarded as the world’s most ambitious aviation region.”
On the 18 November, Cargo Connect is bringing together some of the biggest names in the industry with opening keynotes delivered by top decision makers from Dubai Airports, Emirates SkyCargo, FedEx and Etihad. The one day conference will look at future advancements including next generation freight, automation, eCommerce and digital cargo.
“The future of air cargo is characterized by increased standardization, sustainability, digitization, and automation,” says Taarek Hinedi, Vice President of FedEx Express Middle East and North Africa Operations. “It is important to address their adoption, application and impact at the industry level and to have open conversations with other industry players at Cargo Connect to enable a cross-sector integrated approach to transport planning and regulation.”
“The Dubai Airshow 2019 is set to be the biggest and best edition yet,” said Michele van Akelijen, Managing Director of show organisers Tarsus F&E LLC Middle East. “The growth in exhibitors is a testament to the expanding aerospace industry in the region and beyond, as our new exhibitors are coming from Asia, Europe and the US as well as the rest of the world. I look forward to welcoming the industry on Sunday to the Dubai Airshow 2019.”