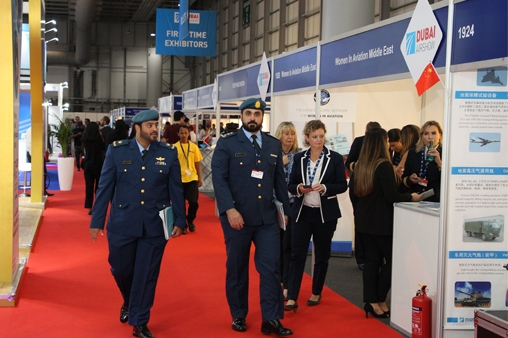 Dozens of countries represented among firms making 2019 show debuts
One hundred new firms have made their Dubai Airshow debut in 2019, with new arrivals on the defence, ATC, maintenance and supply fields all exhibiting for the first time at the show. The dedicated feature pavilions for Space, Cargo and Global Air Traffic Management (GATM) also attracted new companies to the region keen to be part of the growing aerospace market.
The number of exhibitors in attendance is up by almost ten percent this year, with 1288 companies setting out their stands, and business has been brisk throughout the first four days of proceedings.
For Canadian first-time exhibitor Searidge Technologies, a technology innovator providing Remote Tower and Digital Airport solutions, the show’s opening days were particularly fruitful, with Airservices Australia selecting the firm’s digital tower solution for an initial prototype at Sydney Airport.
Neil Bowles, Searidge’s Head of Air Traffic Management, said: “The fact that the GATM conference was being arranged meant we knew a lot of key influencers in the ATM development field would be here. It’s exceeded all of our expectations.
“The amount of visitors has been fantastic – aviation professionals, people interested in what our digital tower offering really is, people that we know within the industry are able to see our latest technology. We’ve had so many meetings with new potential opportunities, and we’ve also been able to reinforce some of the existing relationships that we have with customers in the area.”
In the Space Pavilion, Ukraine-based lunar and space technology firm Yuzhnoye Design Office said it was delighted to be making its debut in a year in which space exploration was taking such a spotlight. “The first time I came to the UAE was in 1992 and from the time I arrived, this country, the people, the rulers of this country, they have very smart policies,” said the company’s General Director, Alexander Degtyarev. “I hope that maybe our company can do something together with the Emirates and the authorities, in space, and the lunar programme.”
Searidge and Yuzhnoye were joined on the roster of new exhibitors by Saudi Arabia’s The Helicopter Company and Saudi Arabian Military Industries (SAMI), the UAE’s Kingsbury and Airports World Company, Taiwan’s Smart Frequency and Korea Defense Industry Association, as well as dozens of others who travelled from across the globe to host stands on site for the first time.
Commenting on their arrival, Michele van Akelijen, Managing Director of show organisers Tarsus F&E LLC Middle East, said: “From the biggest companies in the aerospace field to those just starting out, Dubai Airshow offers a unique environment for building business relationships. It is fantastic to see this confirmed in the experience of our new exhibitors this year, and we look forward to welcoming many of them back to Dubai Airshow in the years to come.”