SEE THE FUTURE OF FLIGHT AT THE DUBAI AIRSHOW 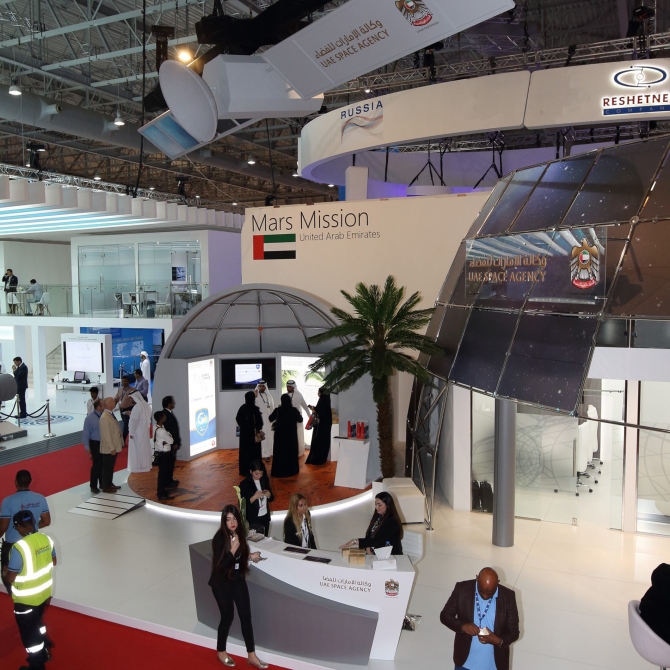 The future of flight will be discussed at the Space Conference and Pavilion at the Dubai Airshow 2019, which returns to the event when it takes place 17-21 November 2019 at DWC, Dubai Airshow Site.
In June, Dubai Airports Engineering projects (DAEP), announced ambitious plans for Al Maktoum International to become a 'cosmic super-port' handling hypersonic and space aircraft in the future, as part of its Dubai 10X initiative. Working in partnership with Mohammed Bin Rashid Space Centre, the goal of the project is to become the premier hub for future travel by becoming an ‘aerotropolis’ and then a ‘cosmotropolis’ with the region’s first spaceport and launch site.
In particular, this super-port will need to incorporate the latest and most advanced technology not just in its space launch development, but also to achieve its vision of integrating the infrastructure at Al Maktoum International Airport to accommodate any current and future mode of transportation, combining car and rail access with the potential future high-speed hyperloop.
Airport technology is already advancing at an incredible rate, with Airport Solutions Dubai taking place as a standalone event on 8 October 2018 and also returning as a feature at the Dubai Airshow 2019, focusing on disruptors to the industry including biometrics, AI, blockchain, robotics, IoT and big data. The Airport Solutions Dubai conference will bring together leading experts to discuss these technologies in more detail and provide the industry with the knowledge to create the airports of the future. The 2018 conference will focus on the future of airports in the Middle East, including plans for the region’s airports to handle 30 million additional passengers with the advent of Expo 2020.
The UAE Space Agency signed a letter of intent with NASA that covers cooperation in the peaceful exploration of outer space and the UAE’s recently launched astronaut program. In addition, the first Emirati astronaut is scheduled to arrive at the International Space Station in April 2019.
With its aim of the UAE becoming one of the top countries in the aerospace field by 2021, the Mohammed Bin Rashid Space Centre is working towards the Emirates Mars Mission with a goal of the Hope Spacecraft arriving in Mars’ atmosphere that same year to coincide with the 50th anniversary of the UAE. A model of the Hope Spacecraft was unveiled at the Dubai Airshow 2017 and has been described as an anchor project for space and science sector in the UAE.
“Aerospace is an industry with massive potential for the future,” says Michele van Akelijen, Managing Director of show organisers Tarsus F&E LLC Middle East. “With the technological advancements and pace of change in the last few decades, it is realistic to expect to see space travel and tourism within a generation. The Dubai Airshow has always been at the forefront of the industry and the addition of both the Space Pavilion and Conference and Airport Solutions Conference in 2017 was well received. We are looking forward to the return of these features and seeing the new developments taking the industry forward.”
The Space Conference and Pavilion and Airport Solutions Dubai will be among many features at the Dubai Airshow 2019, which will also include Smart Manufacturing, Cargo Connect and Global Air Traffic Management (GATM). For more information or to book your space, please contact event@dubai.aero.